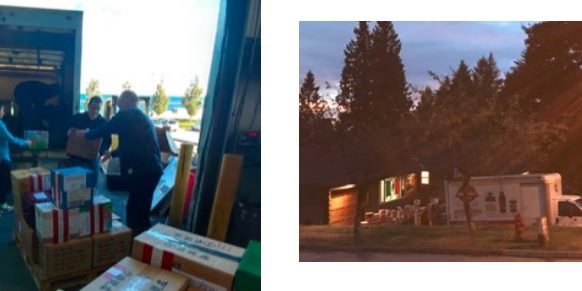 A ripple effect brought families, neighbours, friends, schools, businesses, organizations and strangers
together to help those victims of the devastating Mexican Earthquakes.

The last days have been busy and very emotional for everyone that has been involved in trying to help
the thousands of victims that have been affected by the recent earthquakes in Mexico. Everyone
involved has helped in many different ways. Without their generosity in time and equipment the
collection of all the donations received could not have been possible. Every bit of help has been greatly
appreciated, from smiles and waves of encouragement from the people passing by to the volunteers that stayed for hours at our collection center receiving donations.

It’s amazing how the decision of a couple of North Shore families to help Mexican victims in some small
way resulted in establishing a local collection center to support the initiative of their kids and join the
efforts of Net Radio Online in receiving donations to help the earthquake victims.

The support of schools from West Vancouver was key, kids set tables to collect donations,
involved their friends and explained to the school community what happened in Mexico and why
donations where needed. Thank you staff for all your support!

When you really want to help you can put on hold everything else, and that is what has happened in the
house of the Brian family, they opened not only their home, but also their heart to become the
collection centre to receive donations for Mexico. When you see a family that is so committed to help
victims it is not difficult to find people that will want to join, and such was the case of their neighbour
who after finding what they were doing without thinking it twice was committed to help them. She did
not only help by staying at the collection centre, but also involved her university to collect donations.
Another big thank you to Fairleigh Dickinson University Vancouver Campus and Global Leaders Toast
Masters for all their donations.

Another special thank you to Davis Pharmacy who gave a significant donation of first aid and to Lekiu Importing Co. Ltd. for facilitating the transport of donations to the airport.

Nin Jiom is getting more and more popular for the “Mainstream” market
March 6, 2018